JavaScript objects supports inheritance, but is very different from other languages like Java, Kotlin or C++.

While the latter ones use the Classical inheritance, JavaScript uses something known as Prototypal Inheritance.

Well, in prototypal inheritance, an object can inherit properties from other objects which are acting as a prototype. This is done via an internal and hidden property - [[Prototype]], which is a reference to either another object or null. This [[Prototype]] property can be manipulated using another property - __proto__, which is attached automatically every time a new object is created.

Let’s clear this with an example:

If we run this code, we get:

But how? We never wrote the length property in the fruits Array. Not only that, but just like length, we somehow also have access to other properties like concat, map, find etc. 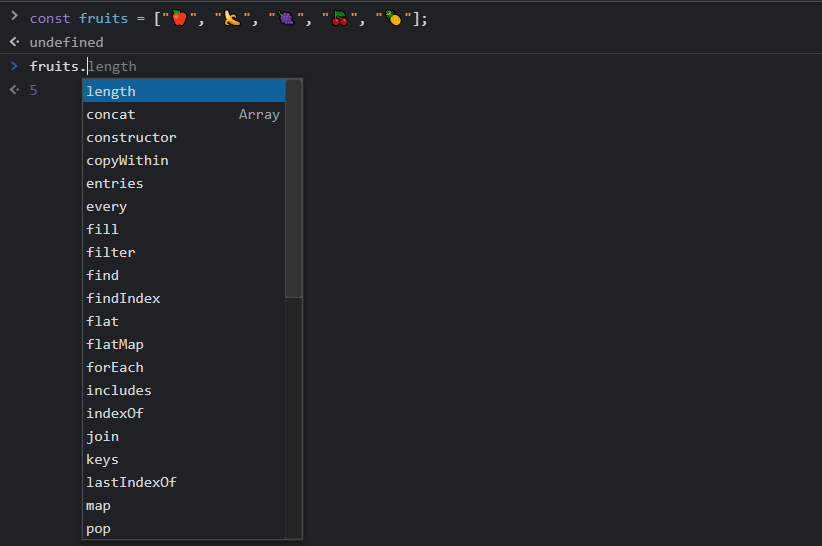 It’s because fruits is a JavaScript Array, which is acting as a prototype for fruits. The Array.prototype is attached to fruits via the __proto__ property.

This is evident from the snippet below:

This will give the print the following output:

In the above snippets, we saw that, when we create an Array in JS, it automatically inherits all the properties from the Array object. Let us check, what will happen if we create an Object instead with some properties?

We can see that the user.job is the user’s own property, while user.toString() is not a property of the user.

This is the reason that when we type user. in the IDE, the ntelliSense list downs the user’s own properties like name, age, and job as well as the inherited properties like toString(), valueOf().

JavaScript does provides an inherited method - hasOwnProperty(key) to determine if a particular property is it’s own property or an inherited property.

JavaScript uses this mechanism to create an inheritance chain until the Object.prototype is reached in the hierarchy. This chain is commonly known as the Prototype Chain.

Everything is an Object in JavaScript. The arrays, functions. Everything!

The reason why we hear every one say the above quote is because: Every object, function and array will have a prototype chain pointing back to the Object.prototype.

Have a look at this snippet below:

You must be wondering, what Array.prototype and Object.prototype is? Well, F.prototype is nothing but a regular property named “prototype” on F. We know that we can create a new object in JavaScript using the constructor, like new F().

If F.protoype is a property, then the new operator uses this property to set the [[Prototype]] for this new object.

Every function is JS, will have a “prototype” property. If we don’t supply a prototype manually, the default “prototype” is set to an object with only a single property - constructor, which is referenced back to function itself.

The thing is - since the inception of JavaScript, prototypal inheritance was it’s core feature. There was no other way to directly access it. Developers only had the option to use the constructor function, which directly manipulates the “prototype” property.

What about JavaScript classes?

With ES6, classes were officially introduced to the JavaScript language. These were introduced to create blueprint for creating objects just like other languages like Java and C++. Let’s see how it’s generally used:

This will create a dog object, with properties like legs being inherited from Animal object. Well, the thing is, class syntax is just a syntactic sugar on top of prototypal inheritance. The underlying code is pretty similar to the prototypal one written above with some minor changes. Let us have a look on that:

Unlike other languages like Java, Kotlin or C++, JavaScript supports Prototypal Inheritance rather than the Classical Inheritance. The objects in JavaScript, inherit properties from other objects - known as prototypes.

The ES6 classes are nothing but, a syntactic sugar over the prototype based inheritance.

While this may look a bit different from the notion of inheritance in other programming languages, it is a very powerful feature and opens limitless possibilities, once understood properly.

That’s all for this blog post. Hope you learned something new today. See you in the next one. Ciao!